Currently, English is spoken by over 900 million people. Along with this mass of speakers comes a mass of different and unique Englishes – within England alone there are 35 different dialects. The way that English is used varies from person to person, from place to place. We term these different forms of English vernaculars.

The term vernacular language covers a large variety of different linguistic forms – patois, dialect, slang, provincialism, and local tongue to name but a few. However, all vernacular language is the language that a group of speakers uses naturally, especially in informal situations. Therefore, for our purposes, vernacular English literature is prose, poetry, or drama that either uses or is exclusively written in an English vernacular.

Throughout history, what is considered vernacular has been constantly changing depending on which language varieties have prestige and which do not. The use of vernacular in English literature began as early as the middle ages in England where there were two languages of high prestige – Latin and French.

In part due to the Norman Conquest of 1066, the Roman Catholic Church had spread throughout England and with it came Latin – in prayers and hymns, as well as throughout the bible. At the same time, French was also used  in parliament, courts, and high society. The common language, the vernacular, was Anglo-Saxon, which slowly transitioned into Middle English. One of the first texts to use Middle English was Chaucer’s The Canterbury Tales – which has been seen as pioneering and popularising the literary use of the vernacular.

Brasch’s copy of The Squires Tale, part of The Canterbury Tales 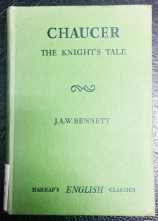 Brasch’s copy of The Knight’s Tale, part of The Canterbury Tales

Brasch’s copy of The Nun’s Priest’s Tale, part of The Cantebury Tales.

Since the days of Chaucer, the English language has continued to develop and spread

If the Angles and Saxons came to England in the fifth century, it was in the sixteenth and seventeenth centuries that the English language acquired the basis of its modern forms and was established all over Britain. It is at this period that the spread of English in the world started.

Through settlement it became the language of several nations. Through colonization it spread over a vast Empire.

The spread of English meant that there were more people speaking English than ever before, which dramatically changed what could be considered English vernacular. Each separate English country began to develop its own standard of English. The first instance of this development came in 1828, when Noah Webster created the American Dictionary of the English Language. Although the creation of dictionaries of is often political and based on the power of a nation, the creation of dictionaries that can are for dialects of English rather than languages are also based on other factors – such as the dialect’s difference from other dialects, to therefore be considered unique.

However, could these new forms of English be considered literary languages? Fortunately,the spread and diversity of Englishes coincided with the start of the modernist period. Literary modernism embraced using language in new and unconventional ways, rebelling against traditional forms. In T.S. Eliot’s “A Game of Chess” from The Waste Land (1922), for instance, Eliot used a lower-class British vernacular to give voice to the two women speakers in the poem. Similarly, Ezra Pound employs vernacular throughout The Pisan Cantos (1948) with one example being found in Canto LXXXI in which Pound uses several different forms of vernacular at different points in the poem – these different vernaculars include various forms of English such as Irish English, Cockney English, Received Pronunciation (Upper Class/Queen’s English) and American English, as well as several phrases in Spanish. 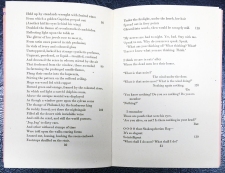 Brasch’s copy of Canto LXXXI in The Pisan Cantos

Pound and Eliot only used the vernacular occasionally in their works, often as a tool to give voice to lower-class characters within their poems. However, in the twentieth century literary texts emerged that were written extensively or even entirely in vernacular. Some of the more interesting cases are Kamau Brathwaite’s The Arrivants (1973), a trilogy of long poems that make extensive use of vernacular Caribbean English; Hugh McDiarmid’s poetry, which is known for its use of synthetic Scotts; and A Clockwork Orange (1962), for which Anthony Burgess created his own dystopian vernacular, “Nadsat,” which exhibits English and Russian influences. 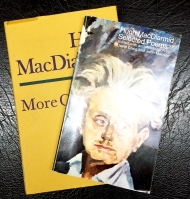 As all of the books, poems, and authors mentioned above are represented in the Brasch collection, can we say that Brasch was a fan of the use of vernacular language? Maybe. However, one thing we do know for certain is that Brasch lambasted the vernacular of his own country and people: New Zealand English. In fact, in Landfall, Brasch commented that New Zealand children were “leaving school as cripples: they are crippled for life by an inadequate command of their own language” (Landfall, No. 37, p5.) In fact, Brasch insisted that New Zealand Literature “must depend on the European tradition”,  actively discouraging the use of New Zealand English in writing (Landfall No. 25, p354.).

Brasch did not like vernacular New Zealand English. However, his collection features many different uses of the vernacular throughout literary history – from Chaucer, to Pound, to Brathwaite. As I have mentioned in previous posts, Brasch collection represents many different social and literary trends, and this evidently includes the use of vernacular in literature. However, just because Brasch owned books containing vernacular, it does not mean that Brasch approved of such informal uses of the English language.

To me, seeing so many different forms of English within one collection is nothing short of exciting. Currently, English is the largest global language to have ever existed – there are more speakers of English in more countries than has ever been seen with any other language. The spread of English has brought a huge number of complications – such as the destruction of linguistic diversity. However, the spread has also increased the linguistic and literary diversity within the English language, which is wonderful – and often forgotten. Whatever Brasch thought, his library illustrates that one major positive effect of the worldwide spread of English was the rise of rich and increasingly diverse vernacular English literatures.