For the last few years, I have had a large encyclopaedia of world religions on top of my study desk. When I have time, I open it at random and attempt to learn about a religion that I had never heard of before, or know nothing about. Looking around my room, as I write this post, I can see exactly five Buddhas, three Bibles, a picture of the Spiritualist moon goddess and several books on Islam. Hiding in the very back corner of the bookshelf, there is a Book of Mormon. It’s needless to say – I am a theology enthusiast (or some may say, addict).

When we first went to view the Brasch Collection, I immediately sought out the religion section. I was a kid in a candy store – there are books on Christianity, Islam, Buddhism, and Judaism. There are books chronicling the lives of the Catholic Saints, and books on ancient Egyptian religion. There is even a book on witchcraft. The Brash Collection houses the most delightful array of religiously themed books, and they are there in numbers.

The Brasch Collection contains 433 religious texts – with a significant proportion of these being texts relating to the Bible or Judaism. These sections can be seen as being representative of Brasch’s family, as Brasch’s father Hyam Brasch was of Jewish origin, and of his New Zealand nationality – as Christianity was, and still is, the most dominant religion. 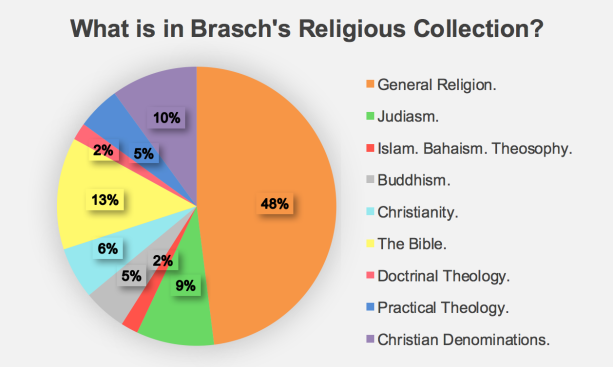 However, to draw conclusions from Brasch’s collection biographically is a dangerous game – one has to make sure that one does not impose opinions and assumptions  onto the collection that are not there. For example, it would be easy to say that Brasch’s large variety of books on religion means that Brasch was religiously liberal.

Although I do not believe that the collection is representative of Brasch’s own religious beliefs, I don’t think it is too far fetched to suggest that Brasch was interested in the diversity of world religions. As is seen by his sizeable world history collection (of precisely 658 books), I believe it is fair to say that Brasch was interested in other countries, cultures and peoples as well. To understand Brasch’s collection of Religious books better, we need to delve a little into the social and historical context in which it was born.

Firstly, Brasch’s collection of religious books can be seen as representative of the growing interconnectedness of the world. Technological advancements made it easier to contact and keep in contact with people who were on different continents, and increased travel and migration (Crossley et al., 2008). Throughout the twentieth century, migrant populations from places other than the United Kingdom grew in size and prominence within New Zealand society (Gentry, 2015.) Although these communities kept to themselves for the most part, there is no denying that they helped to change New Zealand from a colony that was constituted near exclusively by immigrants from the United Kingdom to a more interconnected part of a global network.

This interconnectedness had ripple effects. As people emigrated across the globe, they also spread their beliefs. Whether these new beliefs were welcomed with open arms, cool detachment, or outright hostility, the world was beginning to discover diversity on an unprecedented scale.

I see Brasch’s collection as marking a step on the way to New Zealand becoming a more multicultural, less homogeneously British society – and to me, this is really exciting. In the twentieth and twenty-first centuries, we have witnessed a great deal of discrimination and hostility driven by religious intolerance. In this context, the religious diversity of the Brasch collection is wonderfully refreshing.